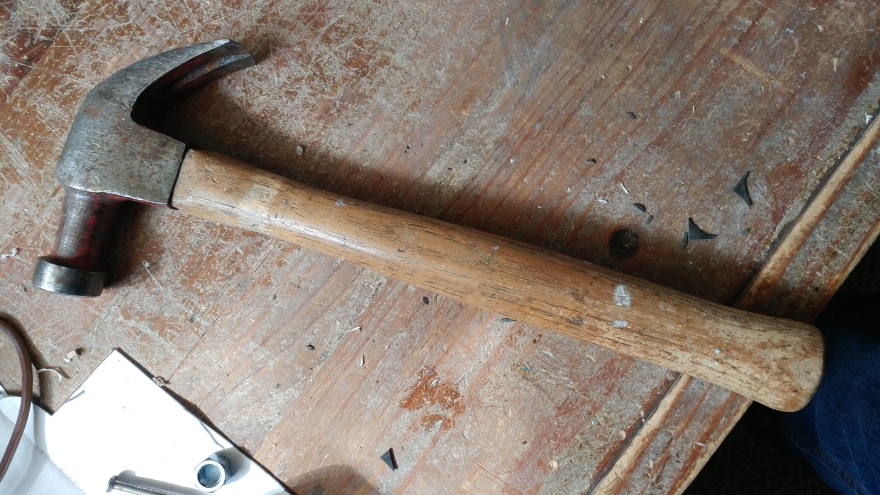 This is Grampa McCarty’s hammer.  You can see a lighter band near the neck where it once had a cloth tape labeling it “F L McCarty”, in case there was any question.

A lot of the tools in my workroom were inherited from my two grandfathers, either directly or by way of my father. Both of them were tradesmen out of the 1930’s, so had large collections of hand tools, many of which came to my father and eventually to me.  This hammer was one of the first to come to me.

I’ve never actually purchased a hammer, but I do have other given hammers.  I use those on quick “utility” projects like hanging a picture or refastening a floor board.  My nicest hammer is stainless steel, a find from my dad’s rebate room.  I use it when I need a clean result, because the head of Grampa McCarty’s hammer tends to leave a smudge of the dirt.

Grampa McCarty’s hammer is for The Projects.  I use it to do meaningful things that I want to do, not piddly things that I have to do.  I stand by my peg board and actively decide whether any task is worthy of grampa’s hammer.  I used it to build Pete and Stu’s fort in the backyard of my first house.  At the second house I used it to build Evelyn’s bathroom vanity, Jenni’s closet, Becca’s bunk beds, and helping Sam to build his Parthenon.

I grab that hammer any time I need a project to come out right.  I don’t expect my grandfather to “guide my hand” or anything silly like that.  But I know that using that hammer will make me focus on doing a good job.  I never took a shop class, so learned all of my lessons working with hand tools with my father and grampa.  “You can always cut more off, you can’t cut more on.”  “Pound a nail like you mean it.”  Using that hammer reminds me that even regular people can get neat projects done well.

My father is getting to the point where he needs to downsize and clear out his basement of tools soon.  I was very pleased to see Pete grab some tools out of his grampa’s basement.  Hopefully among them he’ll find one that reminds him of the tradition he comes from when he works on his Projects over the next 50 years.